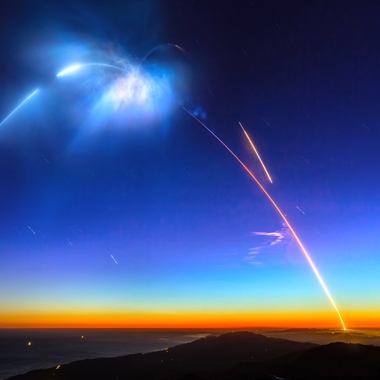 Plugins
ambientbitwiglifedeath
'Unscheduled Departure' is a metaphysical journey that starts with the ambient sounds of a busy airport ticket counter. You hear people all around you, talking and walking in a large open space. Security personnel are giving instructions, boundary chains clang as they are moved, suitcases and luggage bang and clack on conveyor belts. A person walks by. You hear their footsteps approach and then pass by. In your subconscious you hear the announcement for a flight departing. The footsteps pass back by in the opposite direction but this time at a much hurried rate. Suddenly, you realize you are the hurrying person. The gate agent is urgently announcing the immediate departure of your flight. Your pace is steady and purposeful as you plod toward your gate. The aircraft door closes immediately after you board. Your subconscious once again hears all the familiar preflight instructions from the flight attendant. The aircraft engines roar as a collection of souls are catapulted into the air. As the aircraft levels off to cruising altitude, chimes precede an announcement from the pilot. Subconsciously, you think the announcement is another cliché script, but wait...no! What is this? "Secure your five-point restraint, fasten your helmet...prepare for engine ignition", what!? This is no ordinary airplane. Your subconscious realizes this is launch sequence dialogue between a spacecraft commander and ground controller. Following a successful transition to orbit, the roar of the space plane engines grow quiet, you seem to be awakened from a medically induced slumber. In the silent background of a zero gravity environment you realize you are participating in the docking procedure as a crew member of the spacecraft. The procedural announcements between the commander and spacecraft computer are stark and mechanical. Shortly after a successful dock, the intensity elevates once again as a slingshot maneuver is announced around the star Arcturus. All systems are "go" and the build up to success seems inevitable when suddenly catastrophe strikes. An explosion is heard ripping and ricocheting through the bowels of the spacecraft as the crew announces a problem and in disbelief Houston asks them to repeat their comment. Alarms start to blare as the crew struggles to contain the situation. Your heart pounds as you realize these could be the last moments of your life. But wait! Where are we? Are we in a spacecraft or are these the alarms and tones of an emergency operating room. You become aware of a beeping heart monitor following the rhythmic beating of a heart. You suddenly realize the beat is slowing down. Medical personnel frantically try to stop the decline but nothing seems to help. As the end becomes inevitable, you become aware of footsteps approaching. Is this still you? The heart rate monitor flatlines and the footsteps begin to decay. The departure has occurred but in the ambient sounds of the hospital operating room, a new sound is heard - laughter, excitement and the cry of newborn life.
Please Register or Log In to post a comment.

Croc' Oa year ago
Waouuu this is a magical trip ! love it !

Myles Browna year ago
Thank you! I've been intrigued with incorporating ambient sound into the mix

giancarloqq2 months ago
Pulled this project.

ChillyWonkay3 months ago
Pulled this project.

nonplus4 months ago
Pulled this project.

loopzifera year ago
Pulled this project.

Svencloroa year ago
Pulled this project.

TheGa year ago
Pulled this project.

mxksmdka year ago
Pulled this project.

Propellera year ago
Pulled this project.

Voltreka year ago
Pulled this project.

soygazea year ago
Pulled this project.

joseph a year ago
Pulled this project.